The World Wide Web
E–STAMP! EXPO’s
opening at
Z’s Deli had
a wonderful turnout
with friends, art lovers
and abundant sales!
Thank you! you  all!
for zooming in…

…and specially
to Zipporah
whois "Z"
that made this
a possibility!
Be "GREEN" by using e-mail as much as you can!

The very first "Web–eStamp EXPO" will open this Sunday 8th of June at
Z’s Deli
Hours: 3:00 pm to 6:00 pm
You are invited to see them all and
PICK-UP a REAL
World Wide Web
E–STAMP!

Come and enjoy some
finger-food and beverages.

…in the rough! Comets consist of dust, ice and rock.
They have a variety of different orbital periods, ranging from a few years, to hundreds of thousands of years. Orbits extending only as far as Jupiter while others have orbits extending well beyond Pluto.

As it approaches the Sun, the sun’s radiation warms and excites the comet’s nucleus causing it to glow and reflect the solar radiation. Solar wind pushes the excited material away causing a tail to form.
The tail follows an incoming comet and proceeds an outbound comet.

Comet Hyakutake
Discovered less than three months before it’s closest approach to Earth 3/25/96.
It was the brightest comet in 22 years with a tail extending across half of a dark night sky.
Comet Hyakutake should return to our part of space in 29500 years!

Comet Hale-Bopp
Discovered in July of 1995 it’s closest approach to Earth was on 3/22/97.
An extraordinarily bright comet, 1000 times brighter than Comet Halley when discovered.
It was even brighter than Hyakutake, but it had a pair of short tails, one of yellowish dust and reflected sunlight and the other a bluish tail of ionized gas. Hale-Bopp should return in 2980 years.

…is the alignment of three or more celestial bodies in the same gravitational system along a straight line. The word is usually used in context with the Sun, the Earth, and the Moon or a planet, where the latter is in conjunction or opposition.
Solar and lunar eclipses occur at "times of syzygy", as do transits and occultations.

These Web-eStamps show two astronomy syzygies, a transit and an eclipse.

These photos are courtesy of my friend John Cara and the following explanation:
The transit of Venus across the face of the Sun as seen from Earth are among the rarest of predictable astronomical events. They occur in a pattern repeating every 243 years in pairs 8 years apart separated by gaps of approximately 121.5 and 105.5 years. The last transit was 6/8/2004, the next is 6/6/2012. After that, it’s likely not a person alive today will see the next transit in December of 2117.

Syzygy is also the highest scoring word that can be played in Scrabble without using an a, e, i, o, or u.

The term eclipse is derived from the ancient Greek noun “ékleipsis“, “I cease to exist.”

A lunar eclipse is an astronomical event that occurs whenever the Moon passes through some portion of the Earth’s shadow. This can occur only when the Sun, Earth, and Moon are aligned exactly, or very closely so, with the Earth in the middle.

Hence, there is always a “full moon” the night of a lunar eclipse. 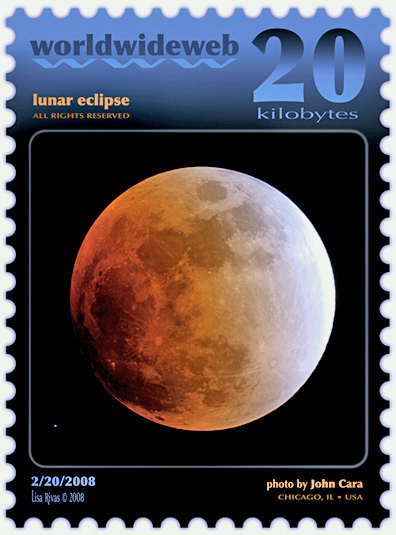 “Lunar Eclipse”
click here to purchase • archival pigment print on 100% rag paper • size variable
North Americans will have their next opportunity to see a total lunar eclipse on 2010 Dec 21. 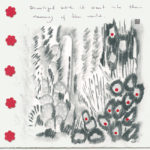 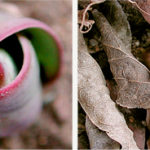 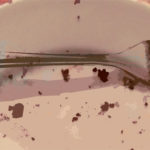 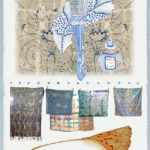